Bolton is an old mill town that grew rapidly when the cotton mills came in the industrial revolution. The town expanded around the River Croal which is now culverted under much of the town centre. Several brooks also went underground which gives some nice stone and brick culverts to see now.

The main Bolton sewer system was built between 1890 to 1930 and takes foul and storm water South East to the treatment works at Ringley. Overflows during storms were made more frequent by small pipes and the steep inline of the system, a series of large tanks were built to stop this. 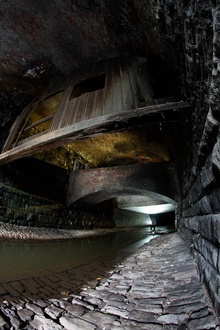