The Holcombe Brook drops underground in a couple of culverts, the first of which is around 280m long and features several waterfalls and cascades.

Getting in was a bit of an effort, a large grill spanned the width of the brook and protected the culvert which lay several meters below. TunnelMon jumped down onto the grill and slid through the ridiculously narrow gap between the bars onto a small ledge to the side of the waterfall. After passing down a large stick the depth turned out to be around a foot deep and it was possible to climb down so we decided to go for it. I took a little longer wiggling through but just about made it with some sucking in. 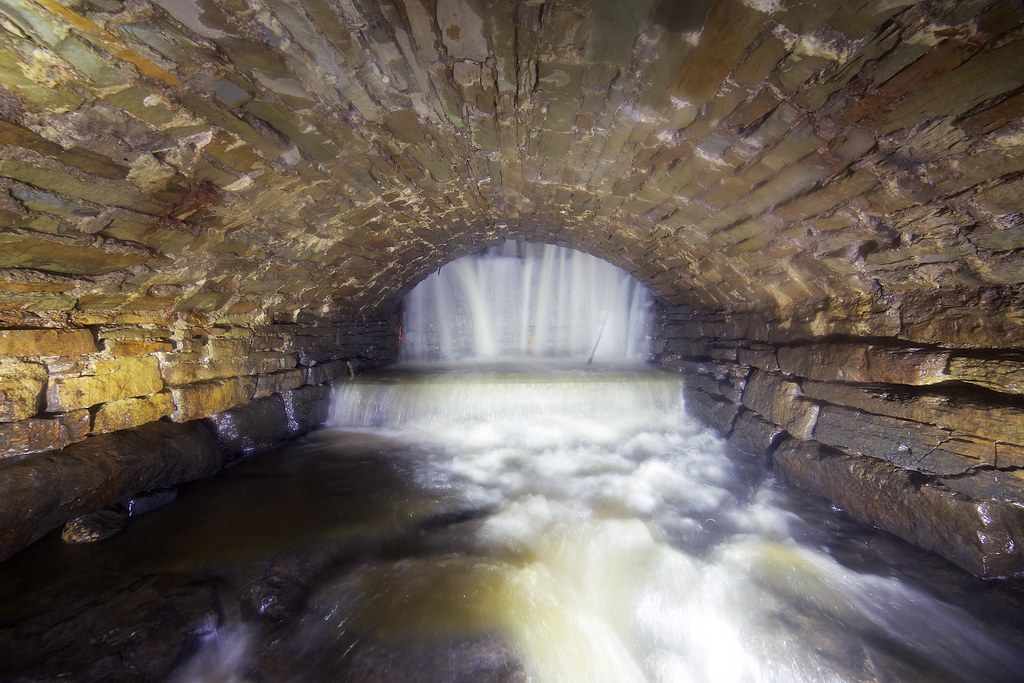 Within was a series of cascades taking the watercourse down a good few meters, the combination of spray and water pouring from above made getting through here pretty wet. 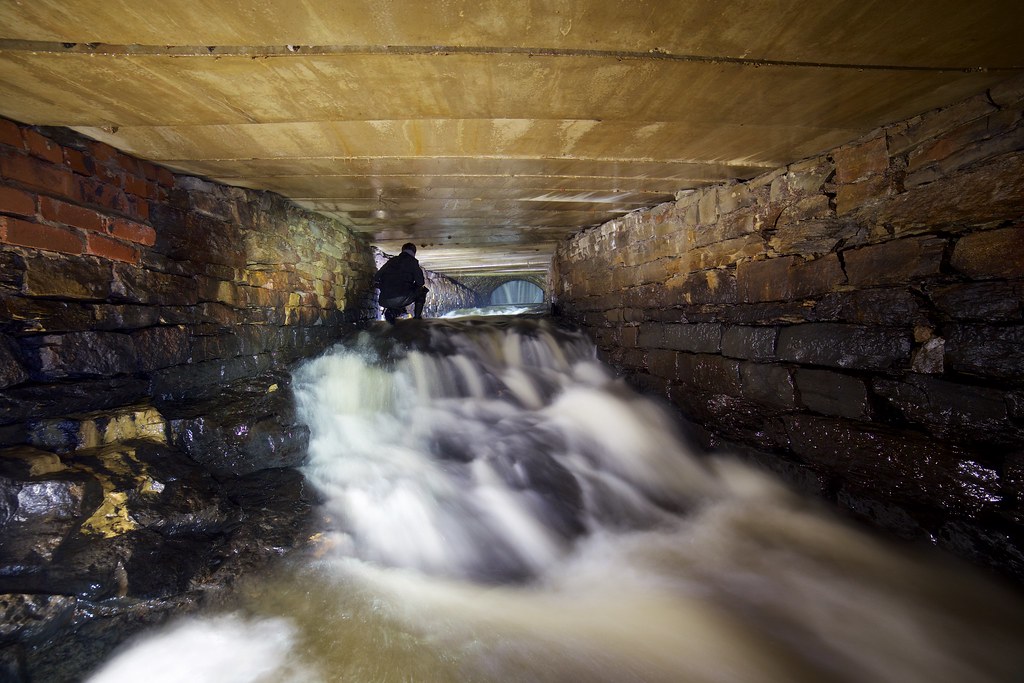 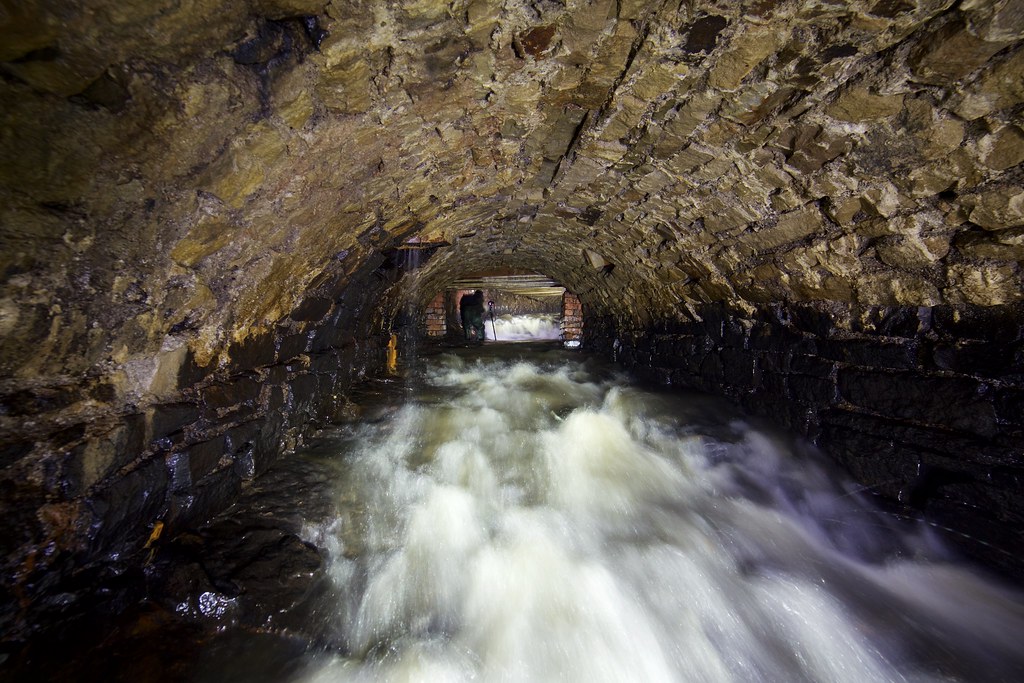 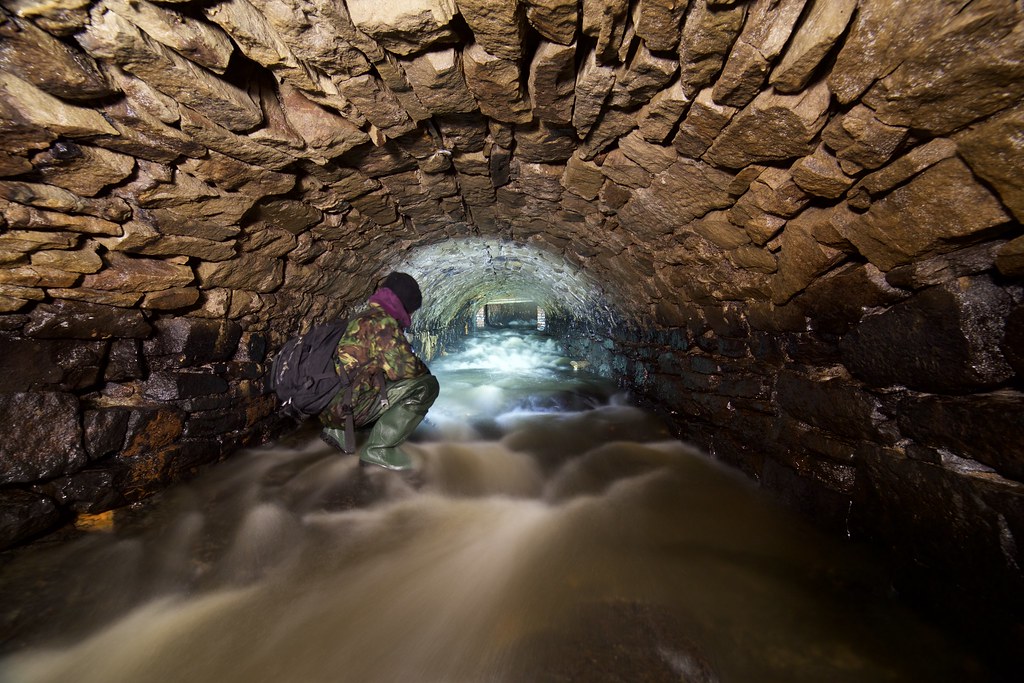 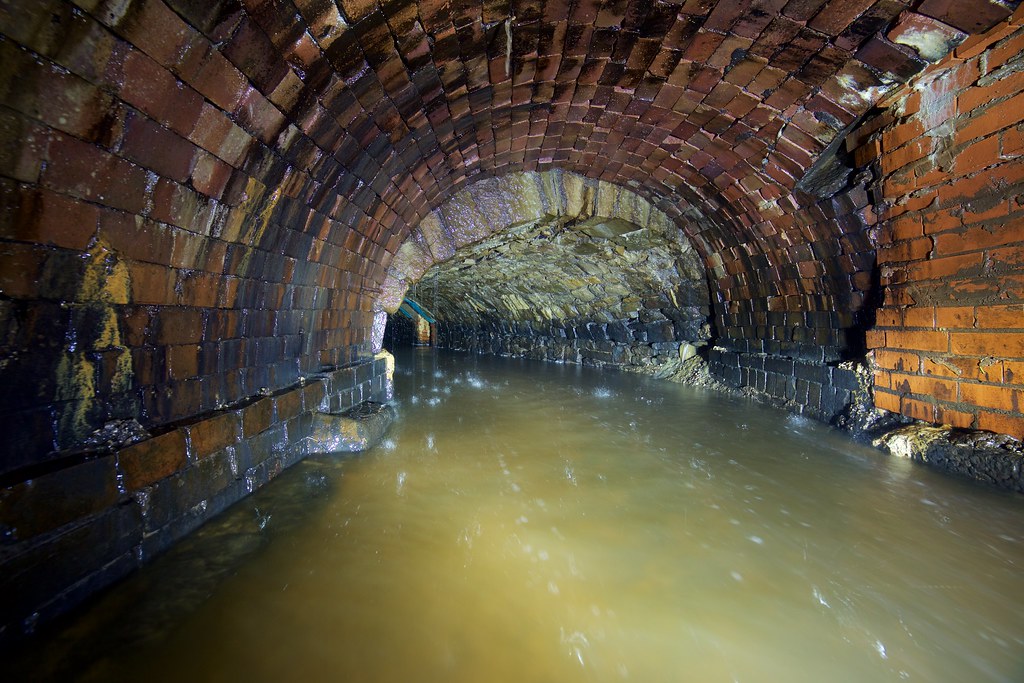 Not far from the bottom of the cascades a new looking manhole shaft had been driven to give a safe access method. There were a number of anchors left in the wall and surveyors marks, presumably from a fairly recent effort to check the culvert's condition.

The tunnel here had shrank to around 4ft, it went on for what was probably a much shorter distance than it felt like. It had been a while since I did any serious stooping and my legs were out of practice, stoping frequently allowed the lactic acid to break down enough to continue to the next section 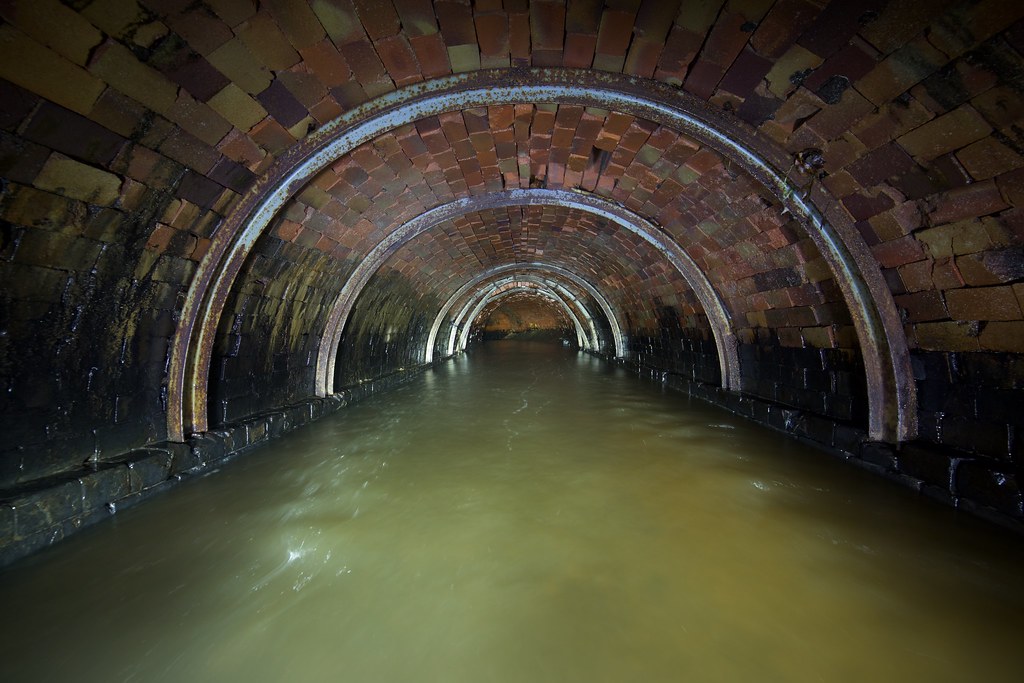 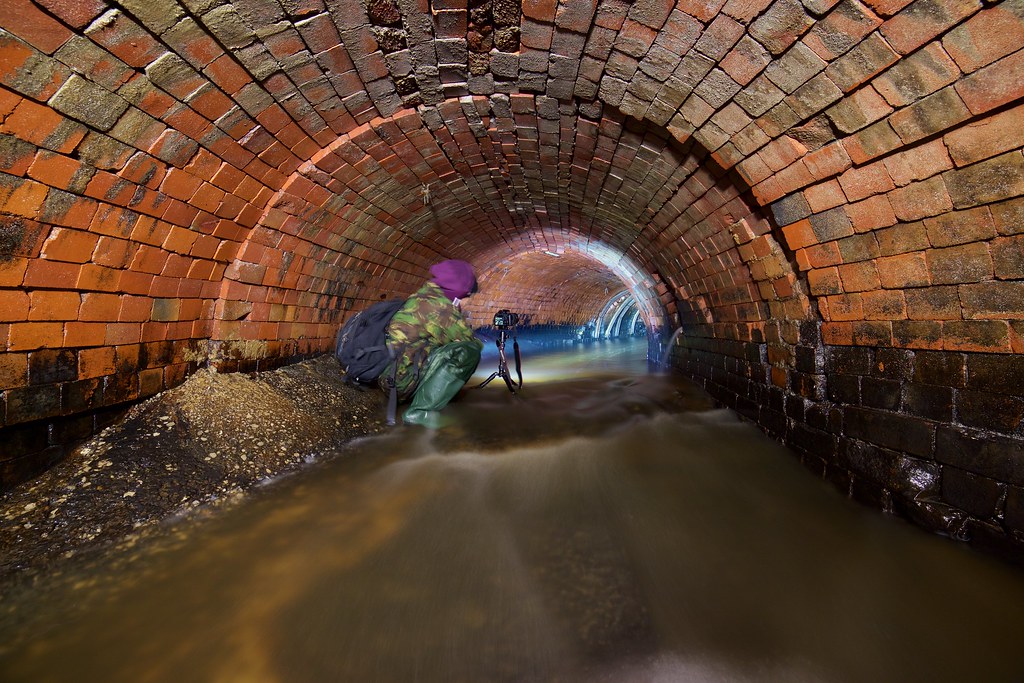 Next up was a brick arch with a metal rib supports, there was a little more headroom but it was still hard going. 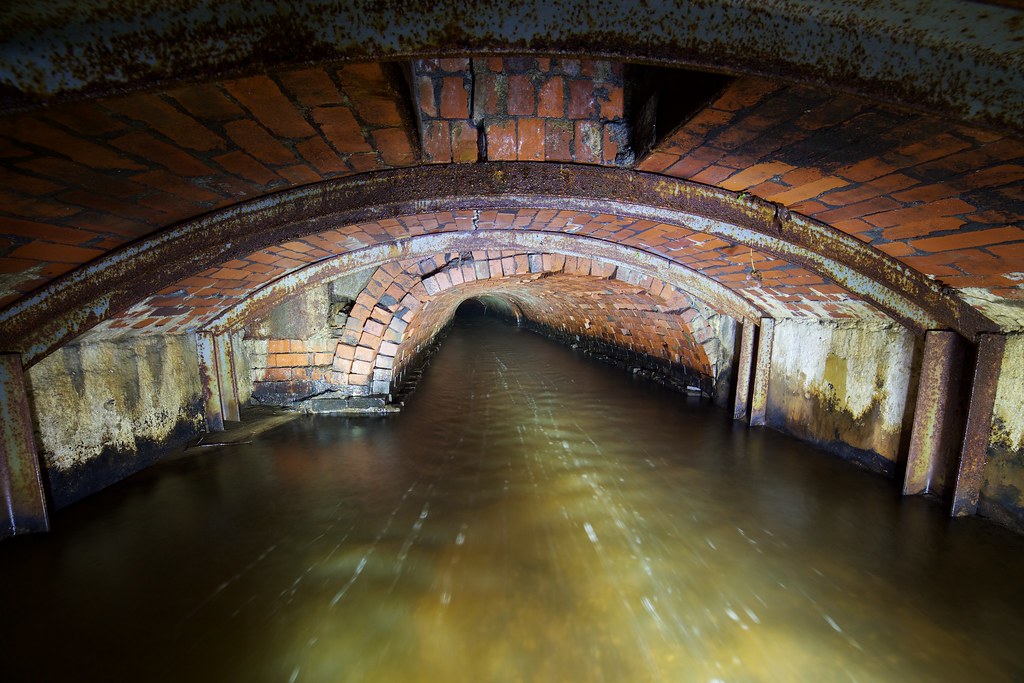 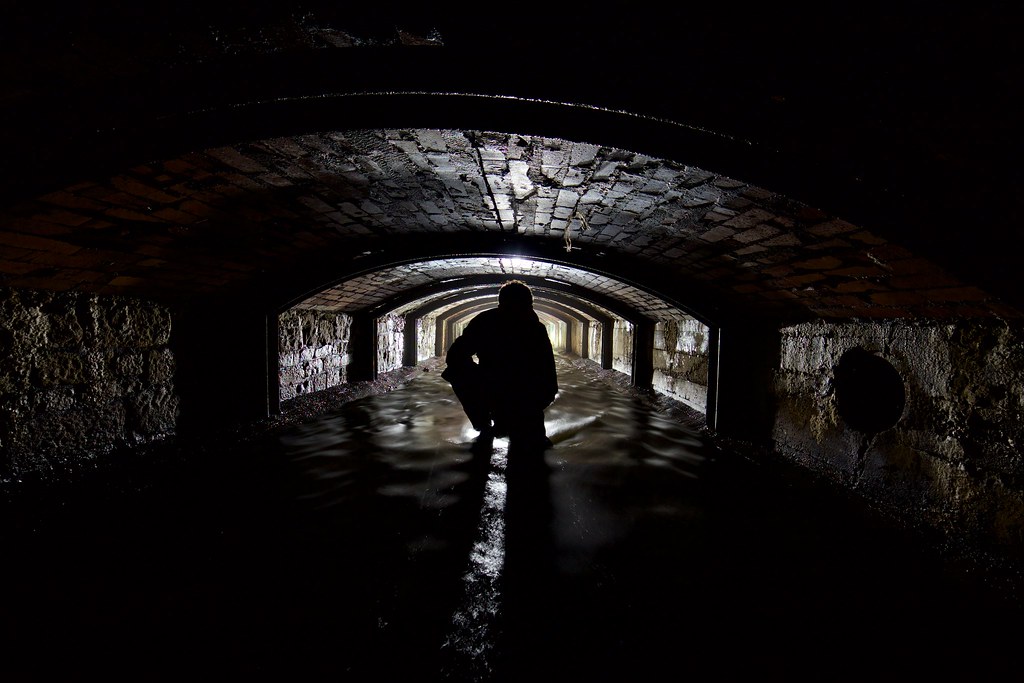 In the distance the roar of waterfall could be heard, we played 'just to the next corner' for a while before deciding enough was enough and stopped to rest before the return trip. 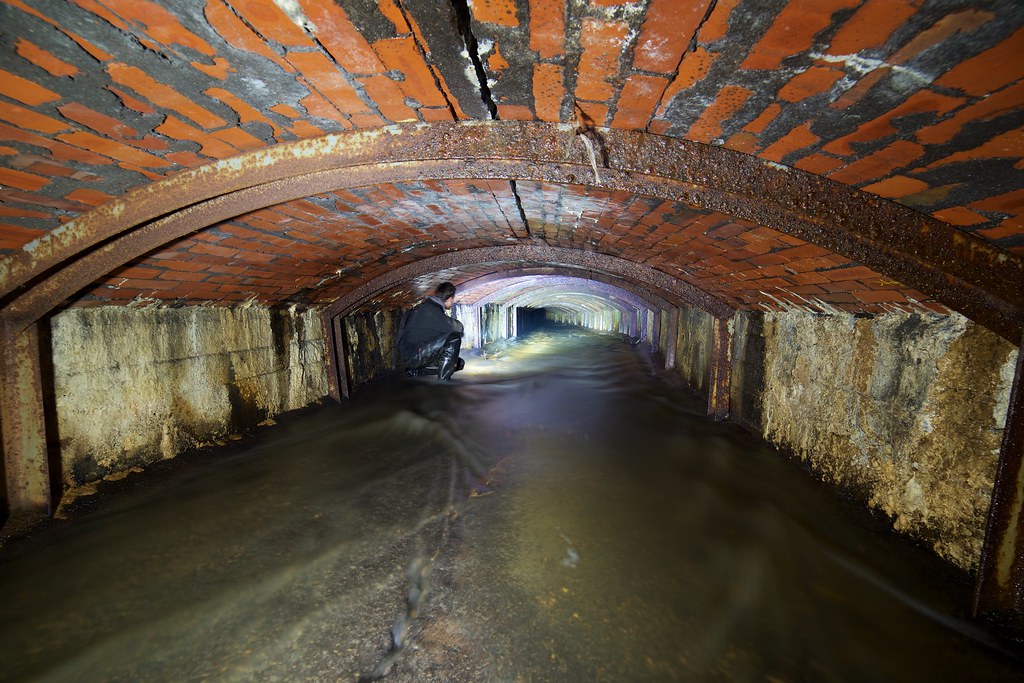 We approached from the other direction and found the waterfall. There was another cascade leading down to it with the same low roof as before, the falls was just tall enough to be impassible safely without getting drenched. 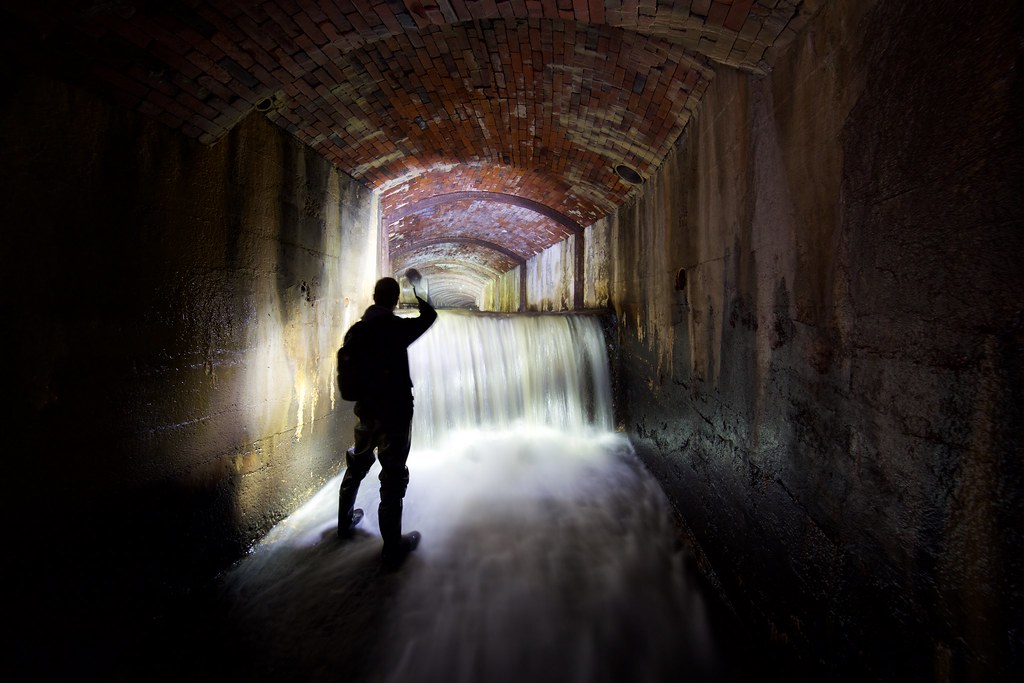 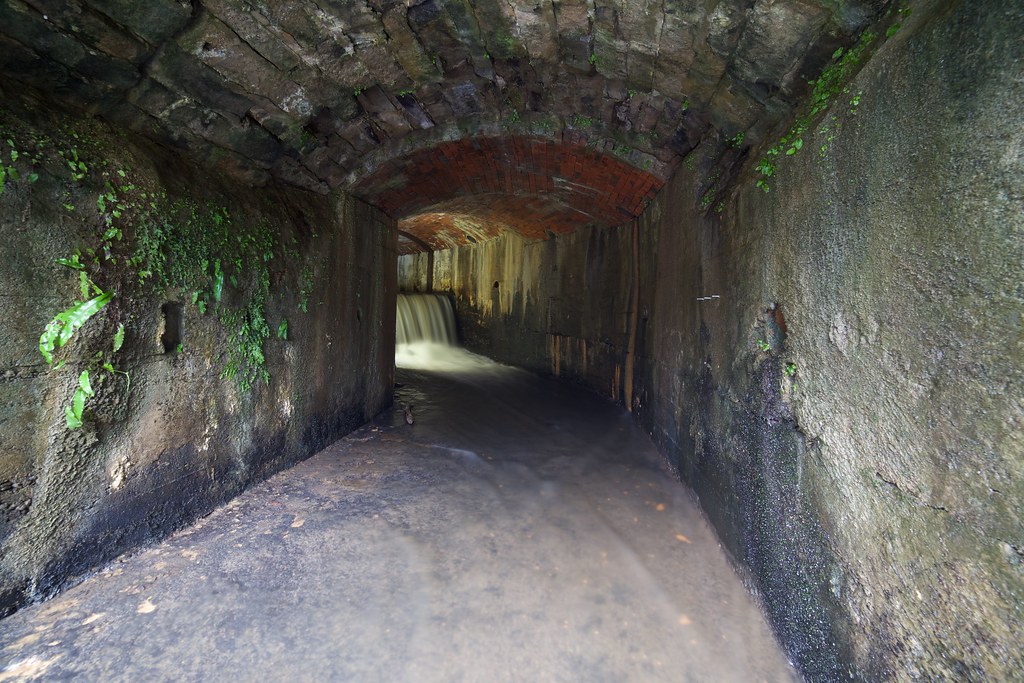 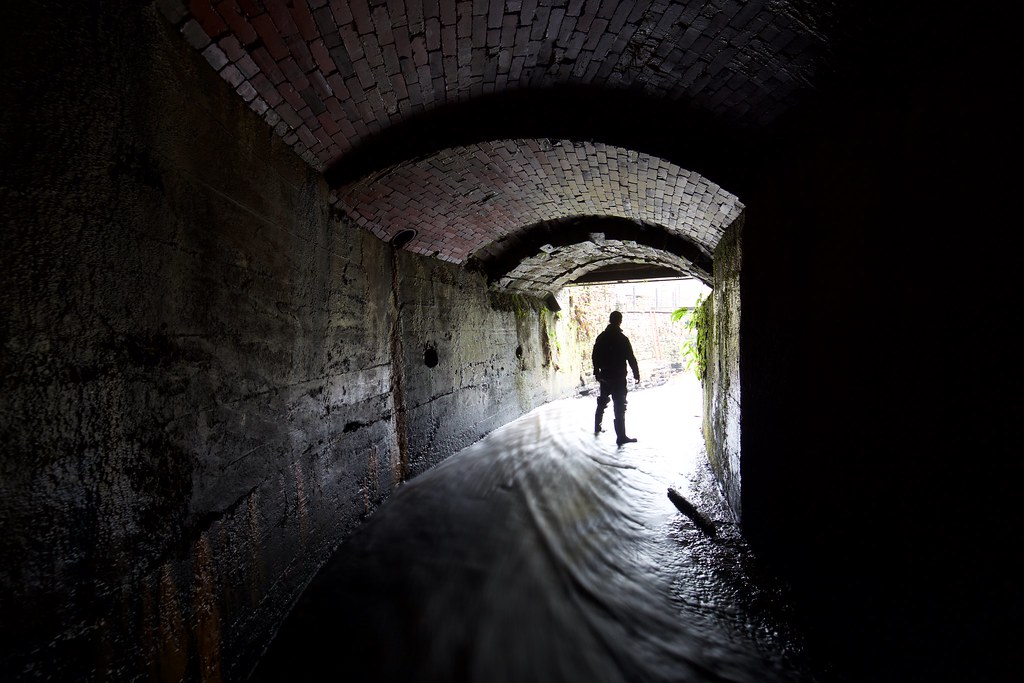 Just after the falls was the outfall, this was basically in the middle of somebodies garden and they had dressed it up to look nice and even installed a ladder down to it. 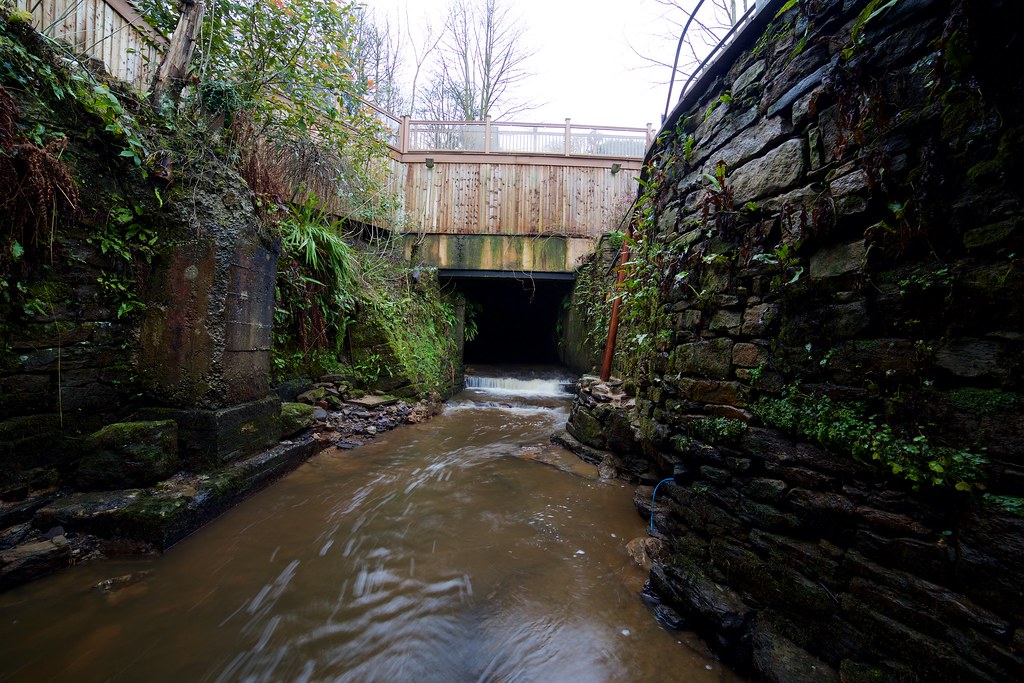 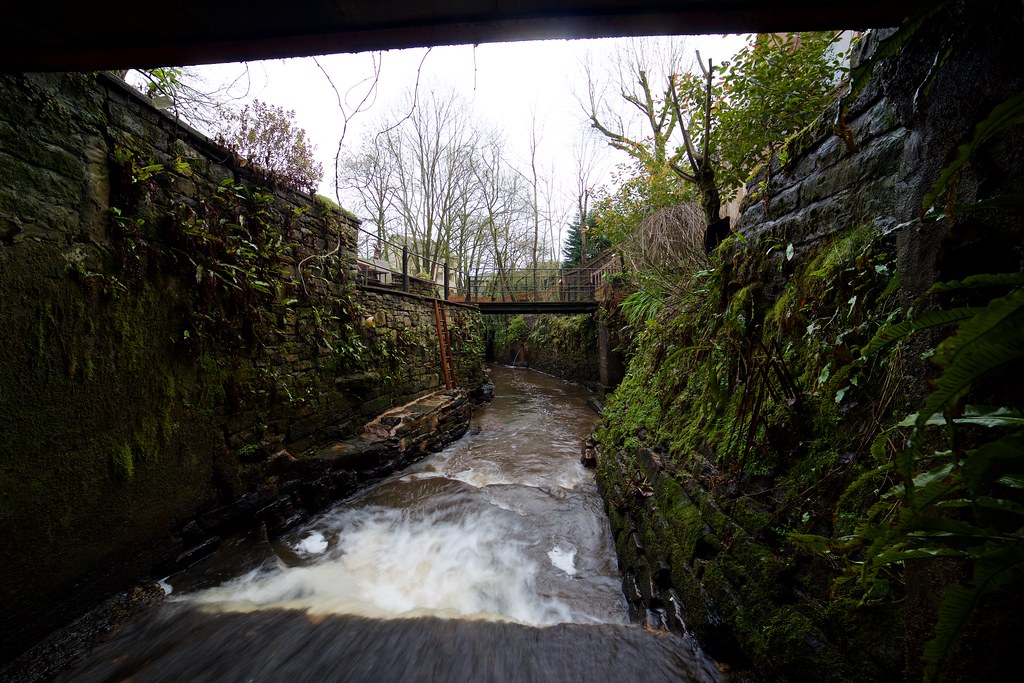 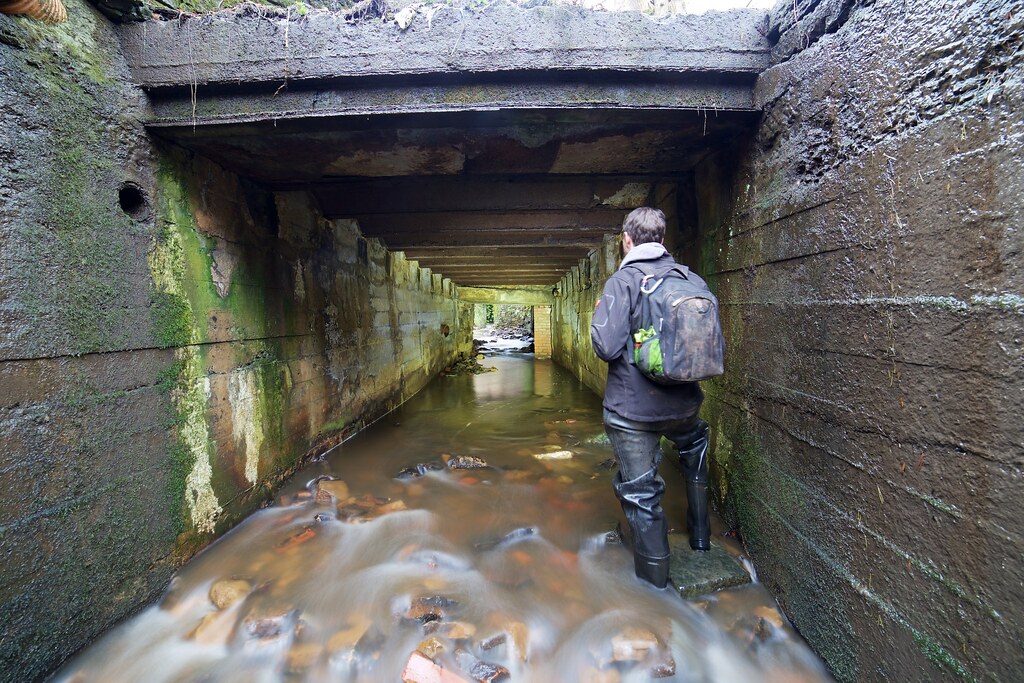 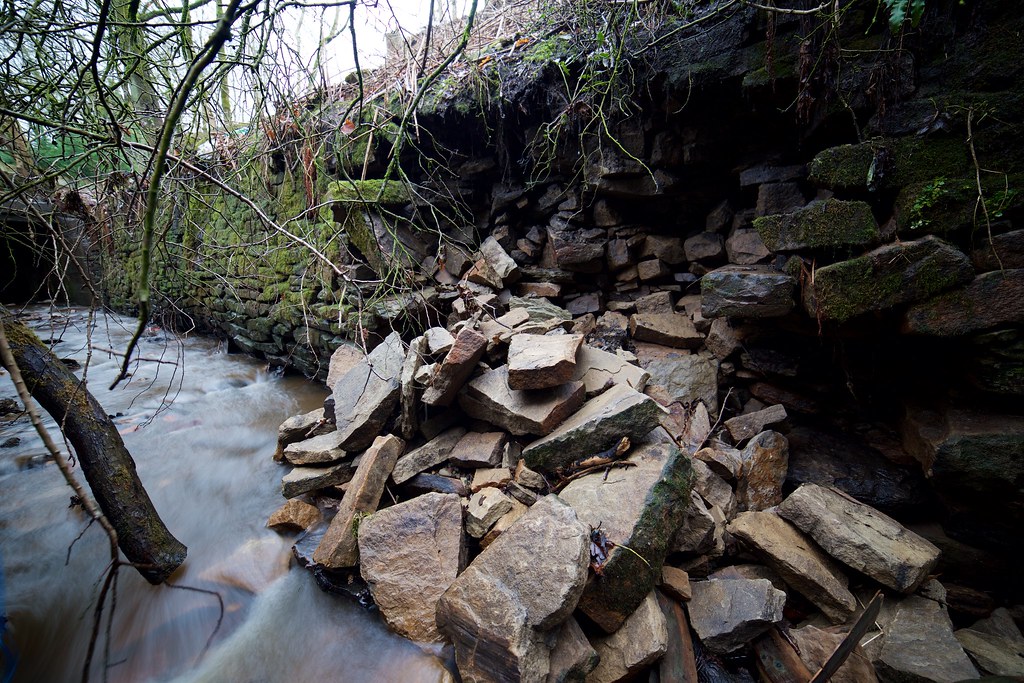 The brook went under a bridge, past a landslide and into the next short culvert. This was spraycreted apart from the middle section which was stone and reasonably sizeable. After that was the final outfall and the brook's return to a more natural state. 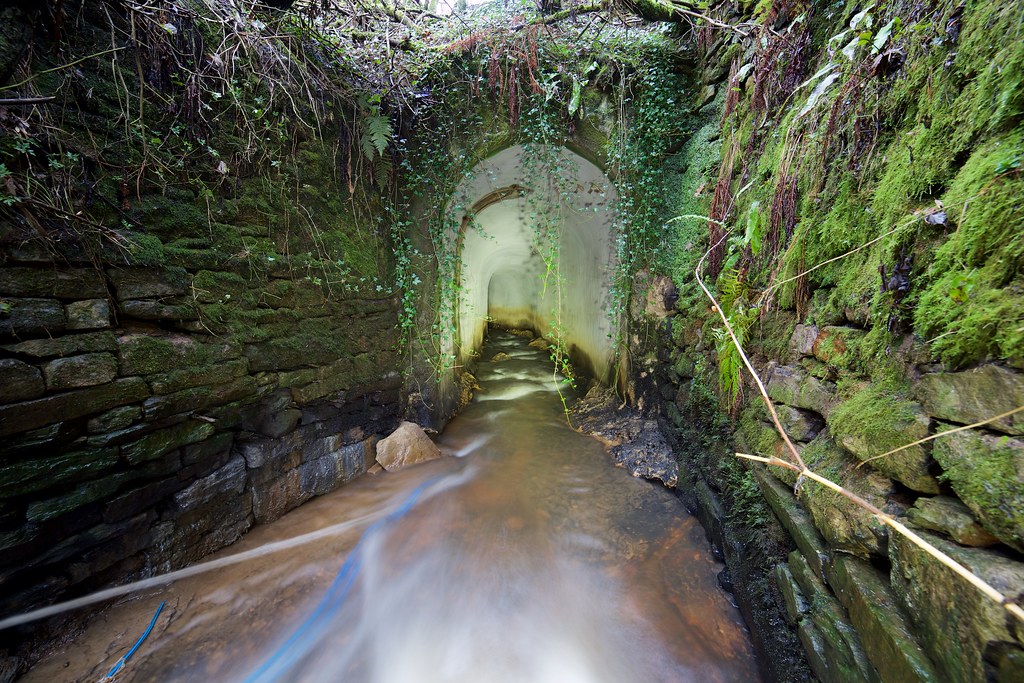 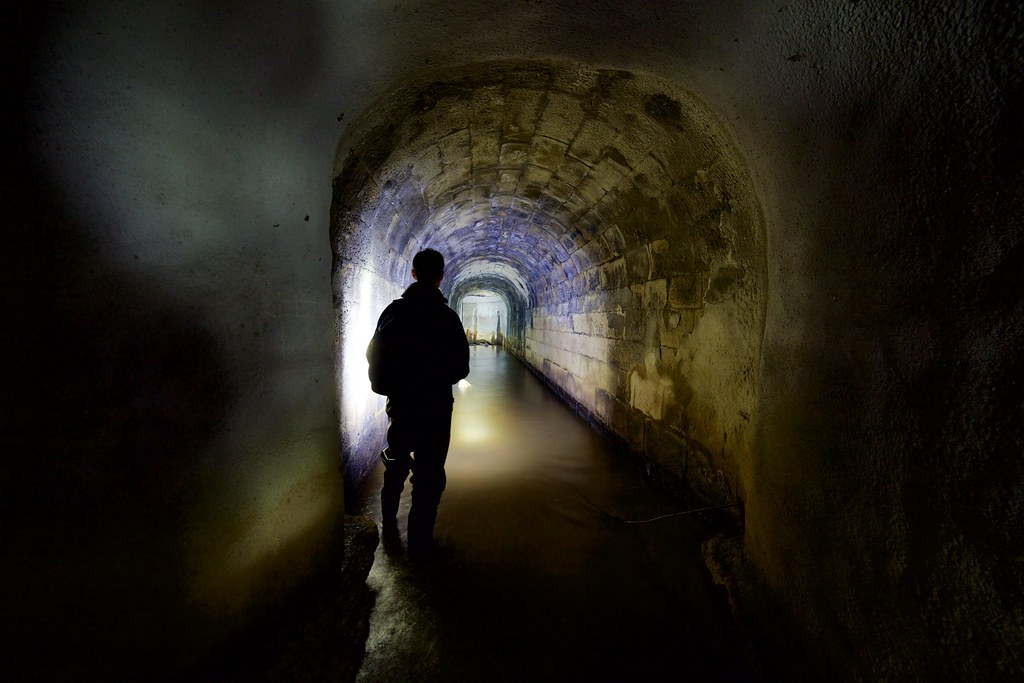 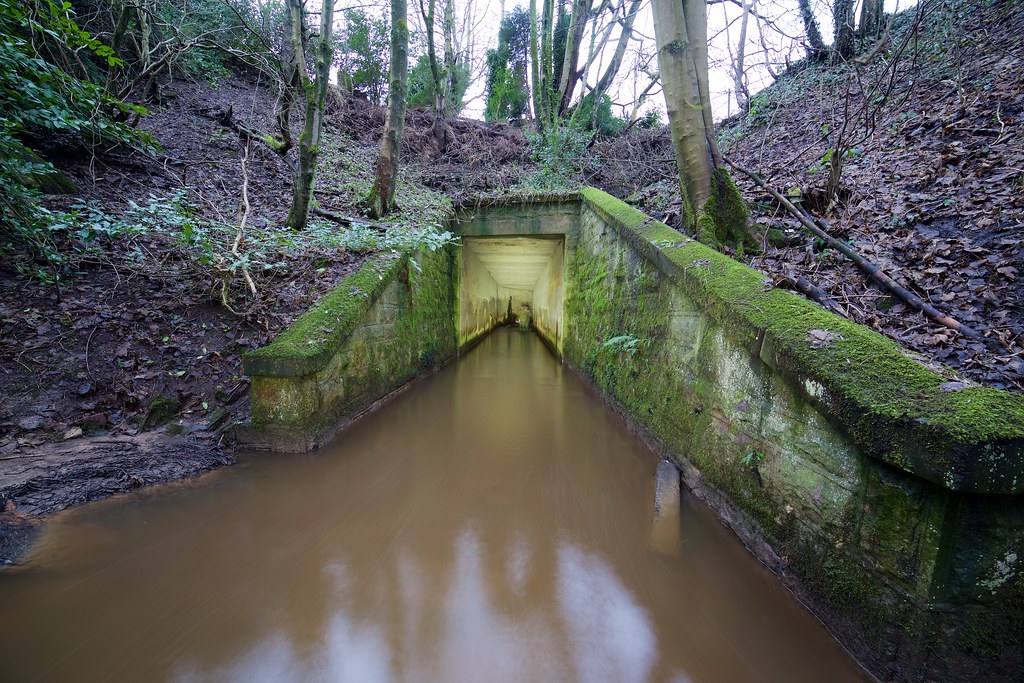