Sidedraft is one of the culverts of the Gore Brook, its mostly brick with some concrete thrown in for good measure. 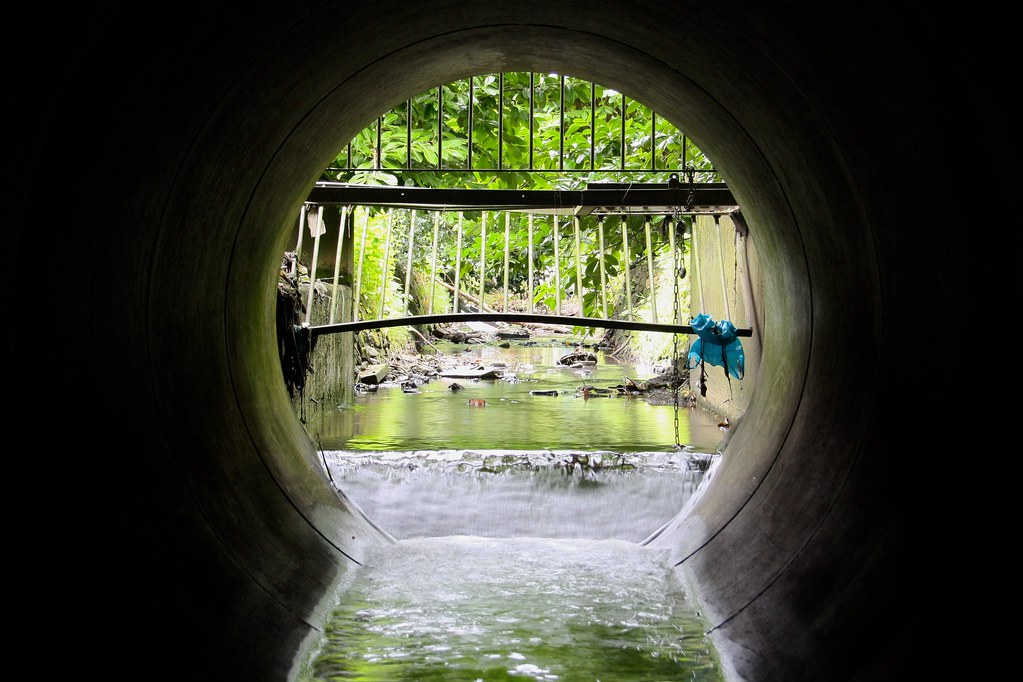 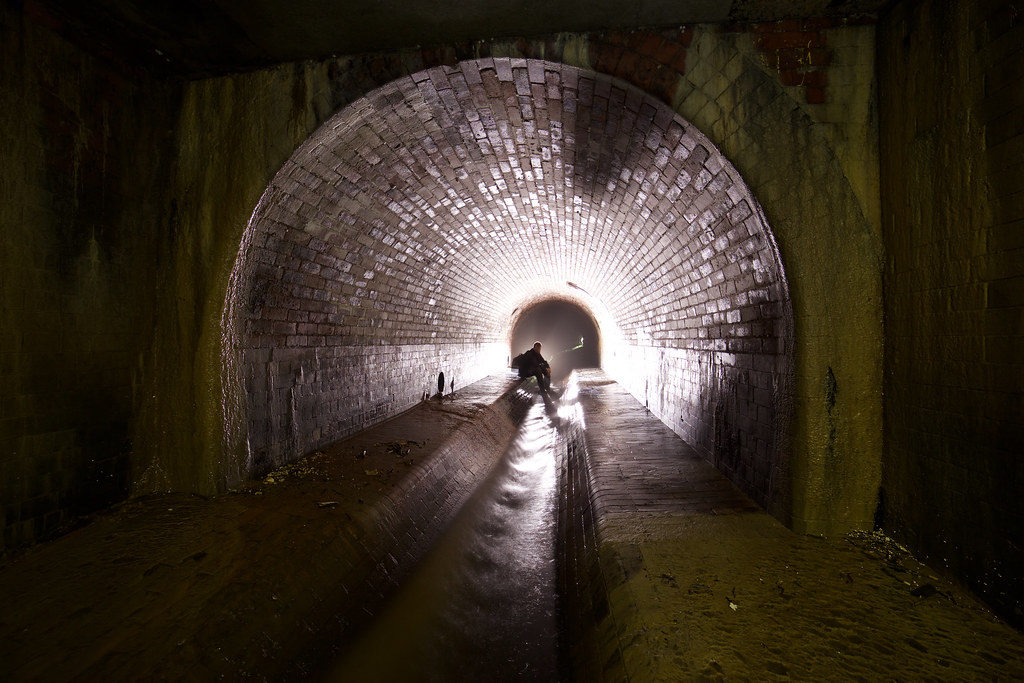 From going under the grill the water level was quite low, but managed to dam up at the end where the tunnel split in two. Rotting leaf mulch released stinking gas under foot, so I moved on taking the tunnel on the right. 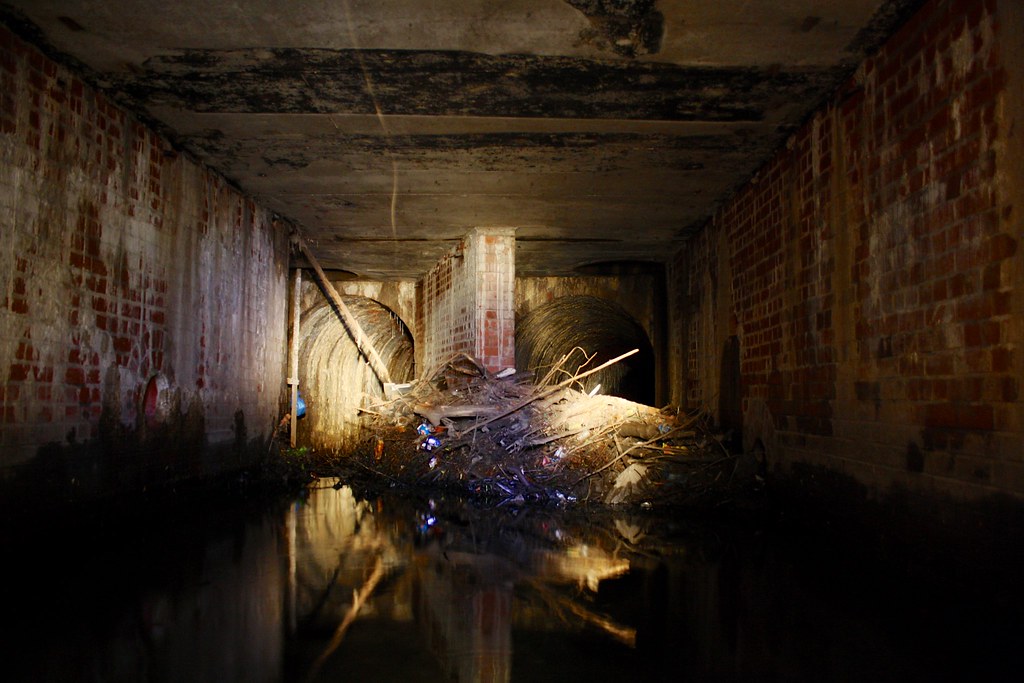 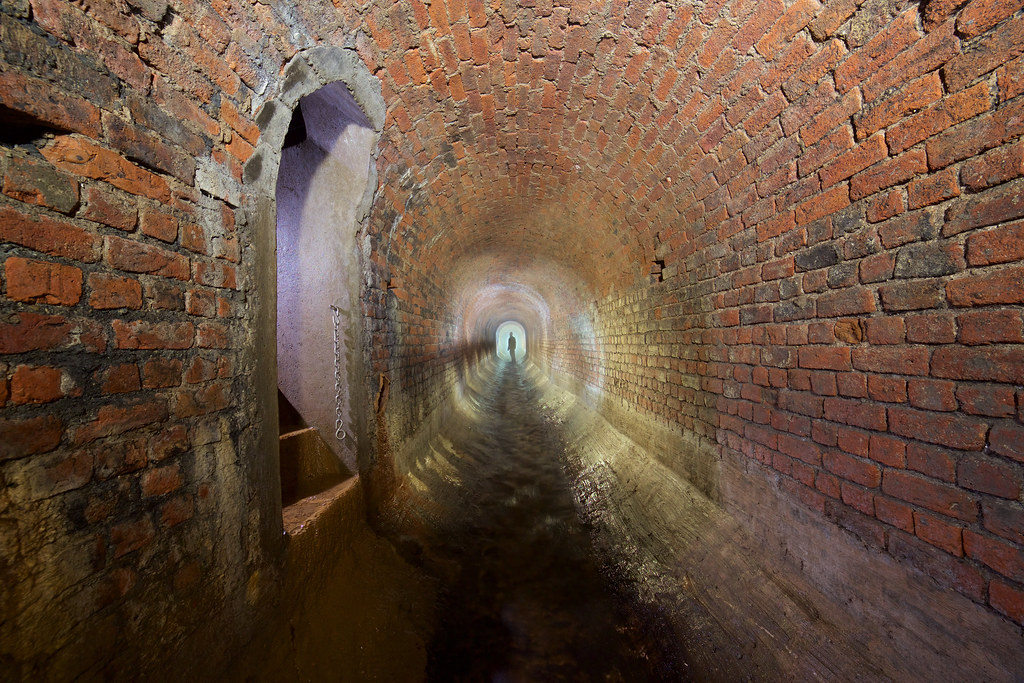 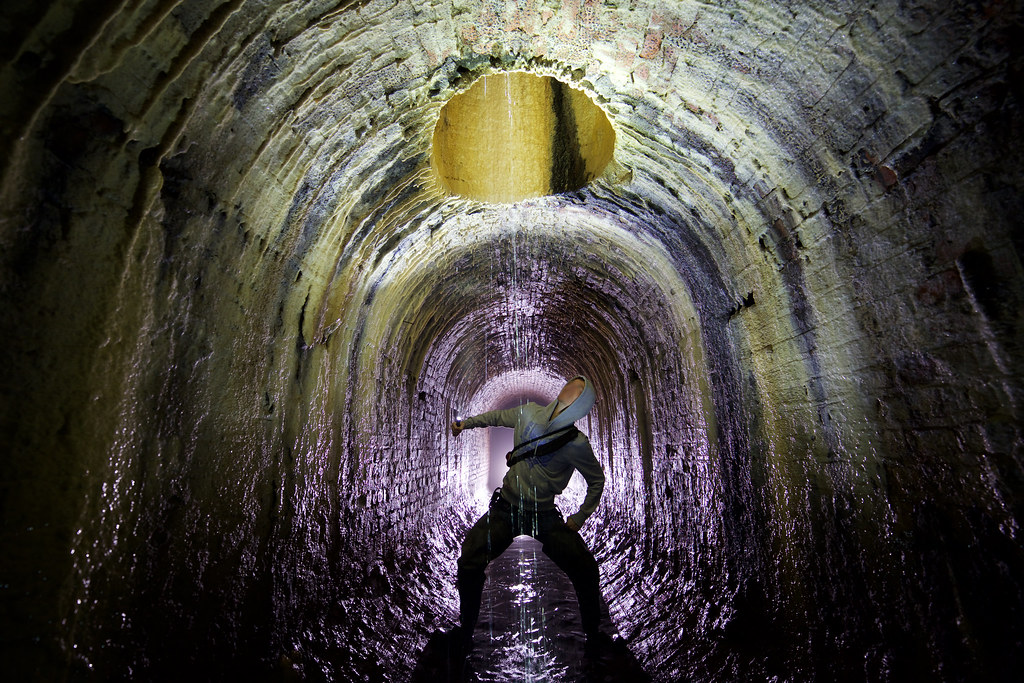 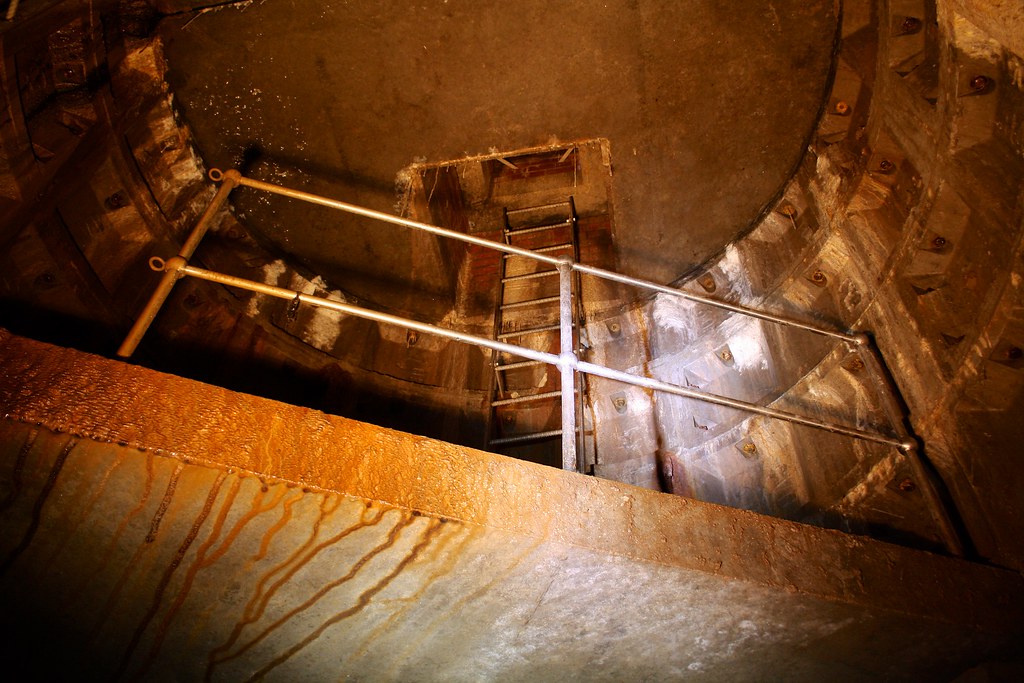 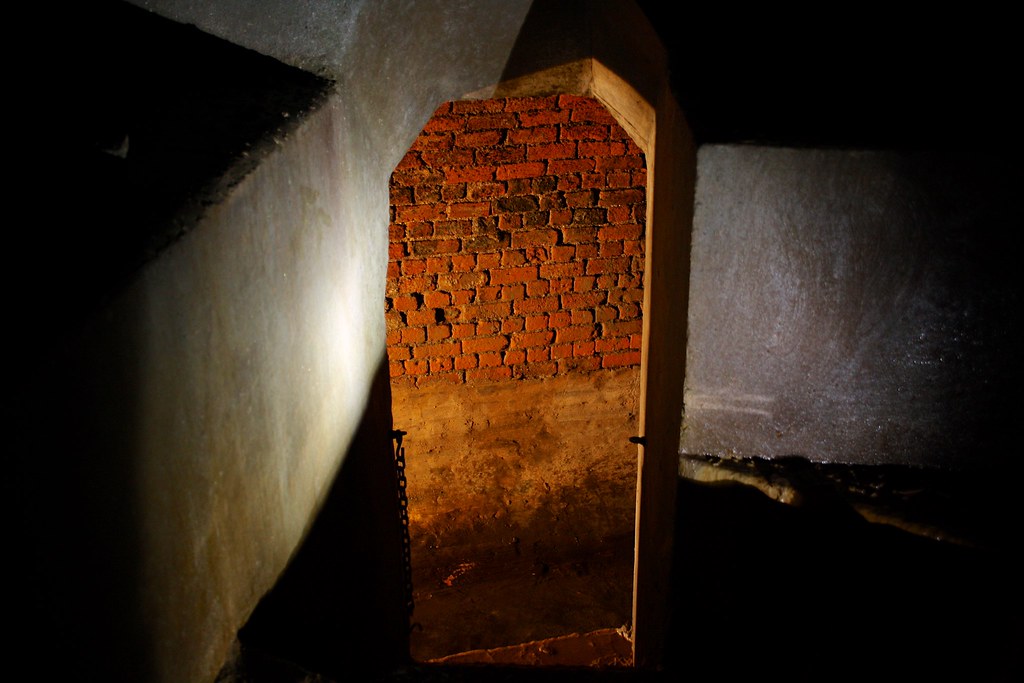 The two tunnels joined back up into a nice big brick arched one. 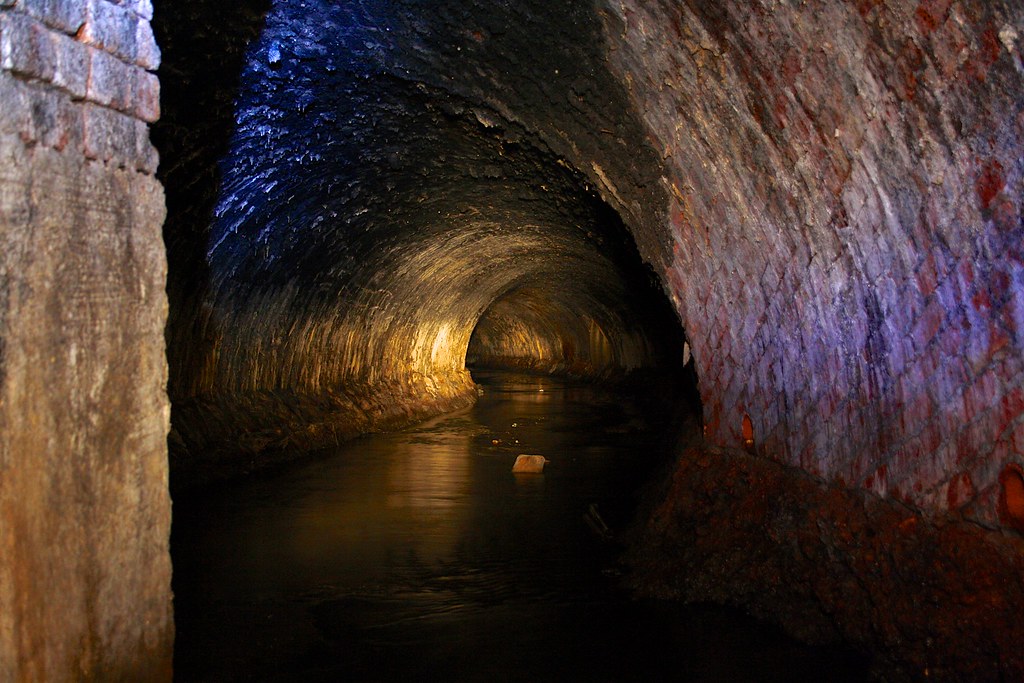 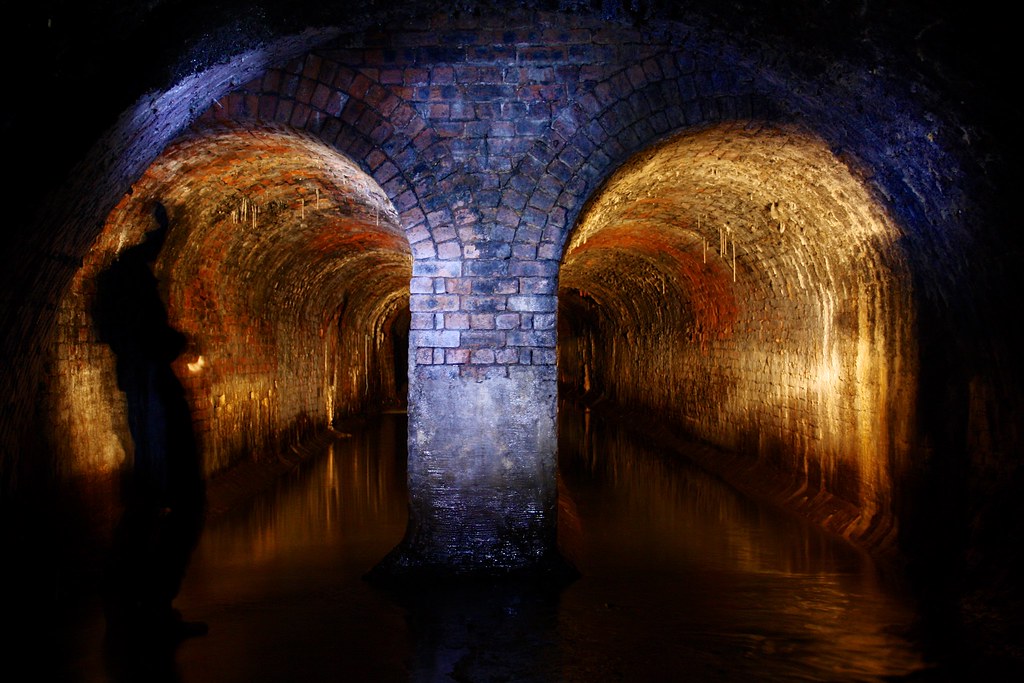 A large sidepipe lead to the CSO chamber 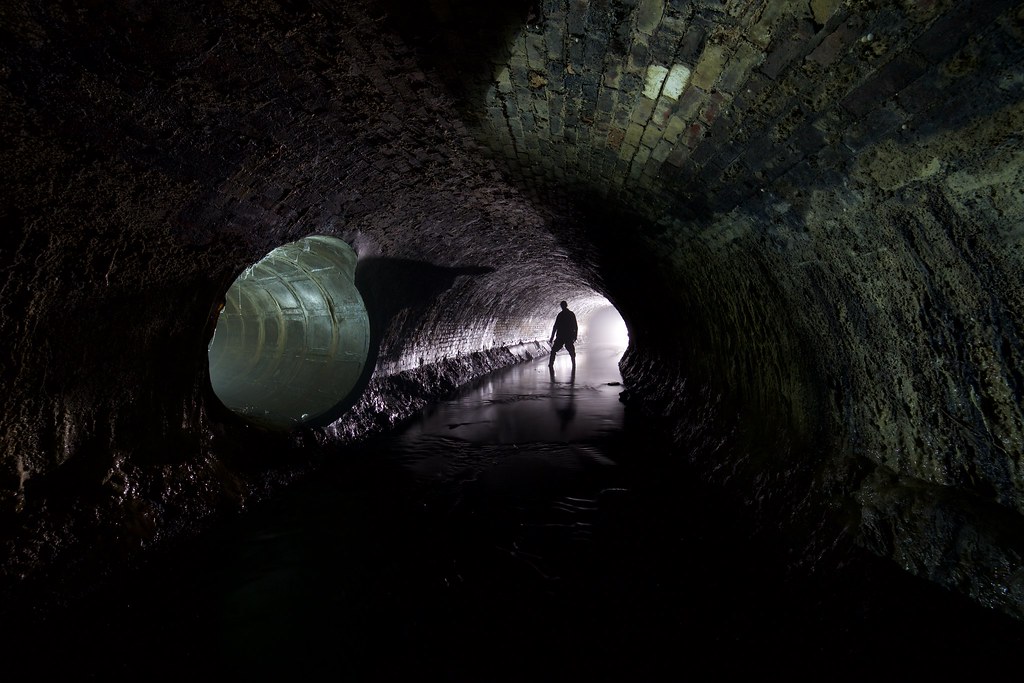 Which was pretty big 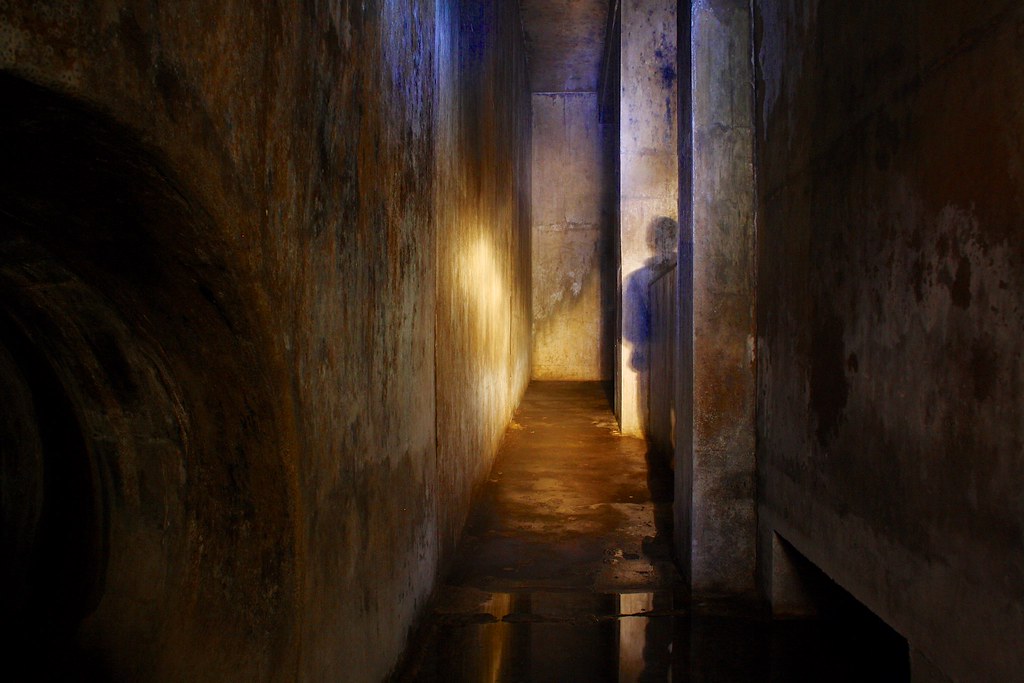 Upto the right is a large concrete penstock that allows the turdy flow to be diverted into the culvert. 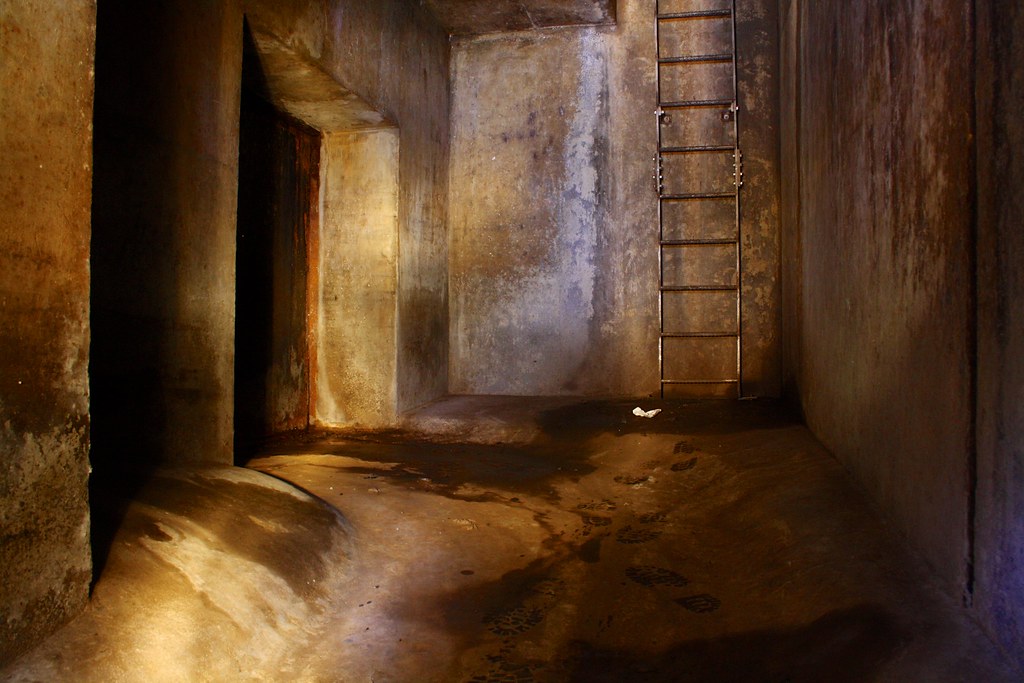 Up on the second level with penstock controls at the end. 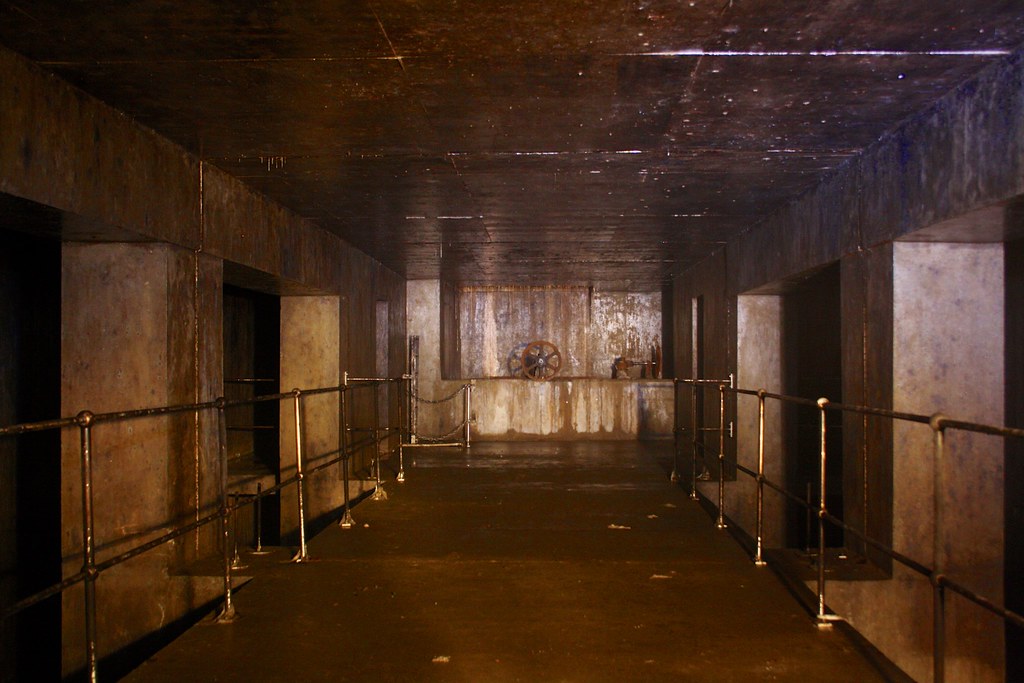 Back down the culvert I saw a water rat, which I tried to chase while getting me camera back out and failed miserably. The floor was full of pot holes and the water then gets deeper leading to the outfall. 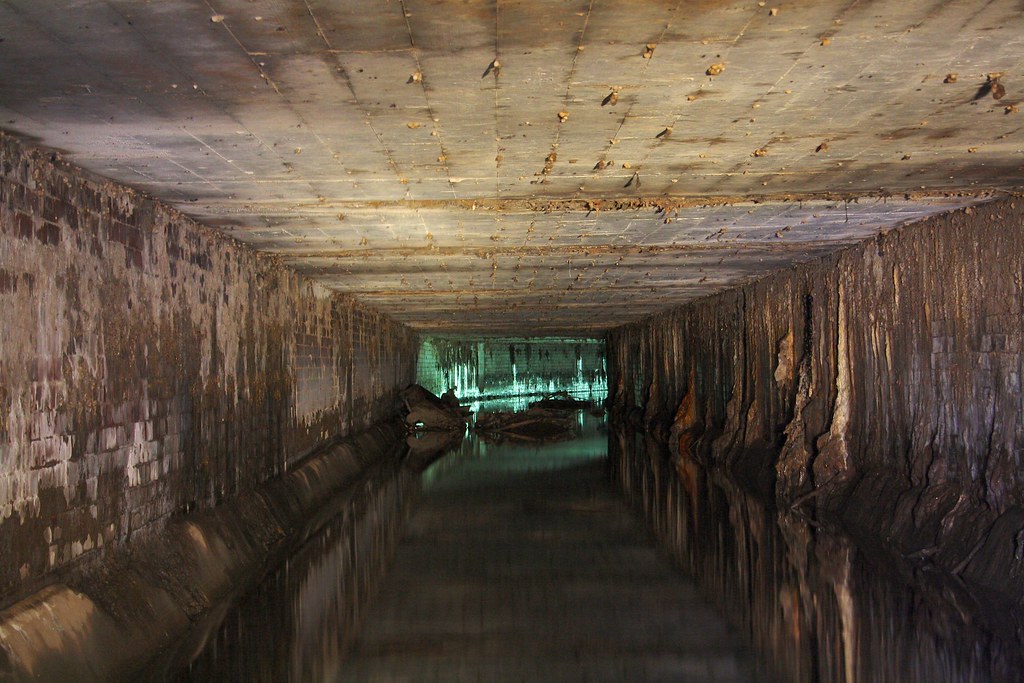 Turned back at this point and went back down taking the other tunnel on the way back, nothing else of note to be found.

I returned years after my first visit to have a further look at the sewer. Last time I remember being intrigued that the sewer was larger downstream of the CSO chamber than it was feeding into it.

I went back to have a further look on what was inadvertently the 3 year anniversary of the first time I was there. 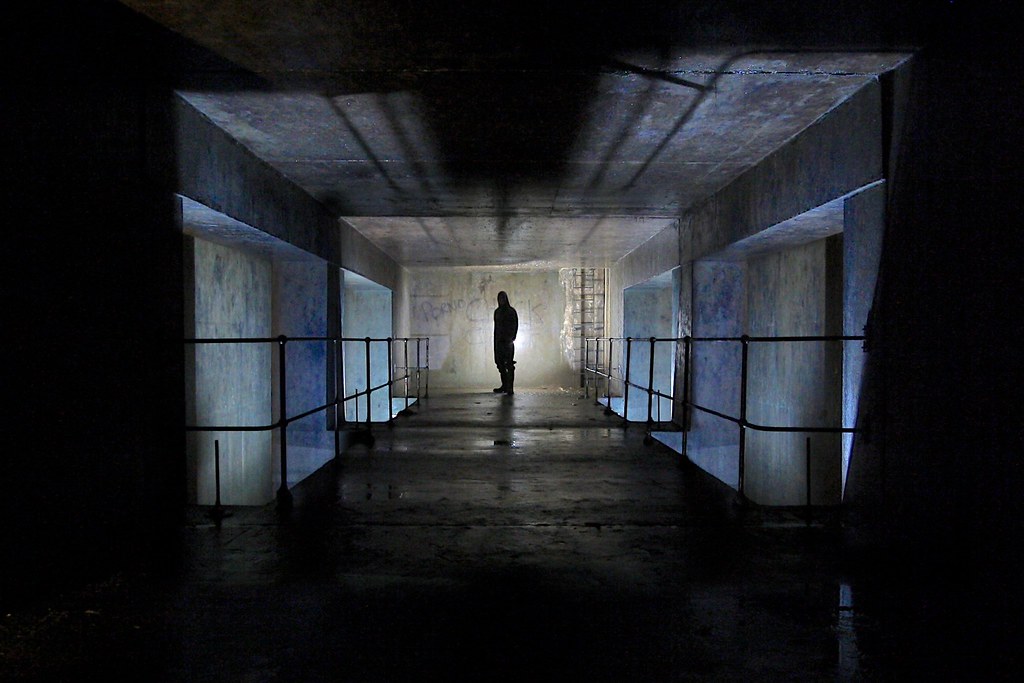 Below the observation level the sewer drops down a slide into a 6ft pipe, a channel in the centre takes the normal level flow. 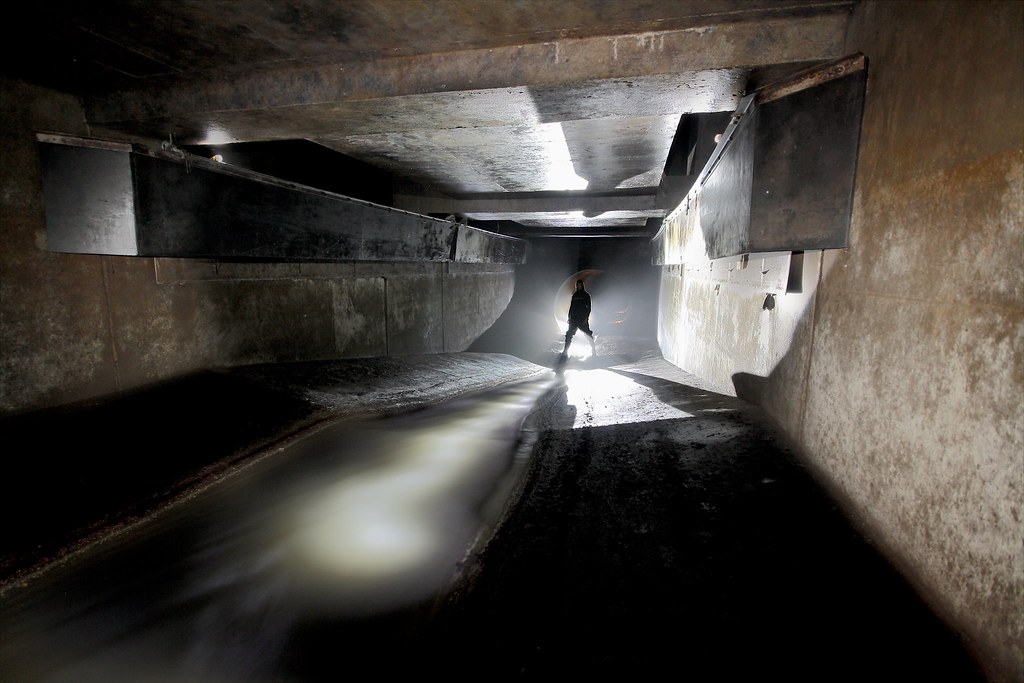 This goes for around 80m before entering a couple of chambers where it does a U turn and heads back towards the overflow chamber. 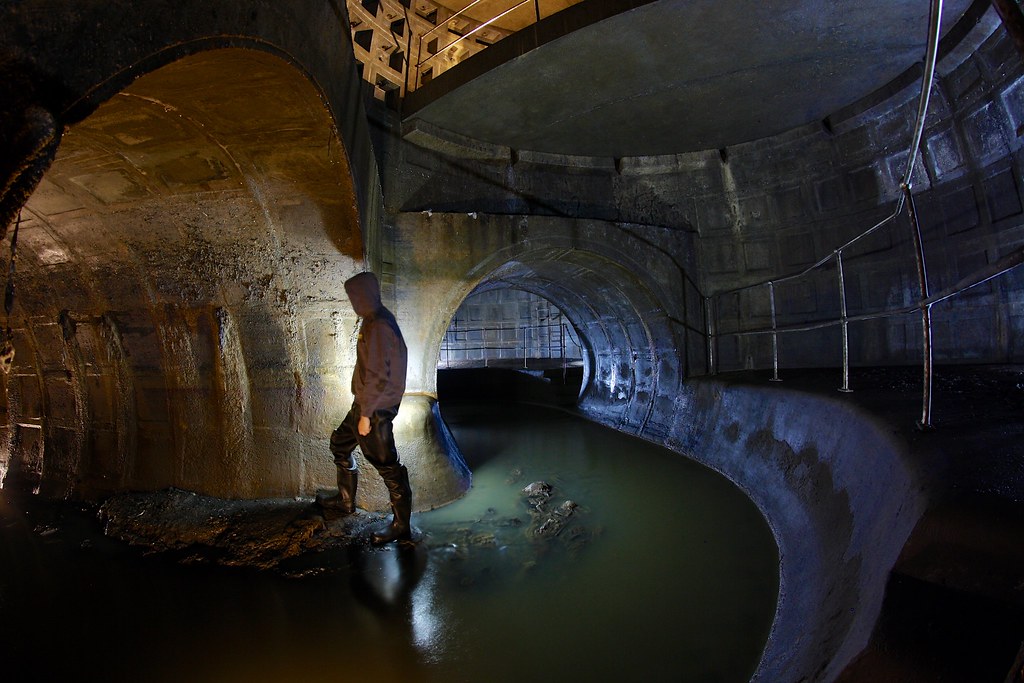 The returning pipe is a larger 10ft, I stopped at this point as the water level was higher allowing deposits to build up on the sides. Each step released dubious smelling gases and I didn't fancy the trek to the end by myself.

I understand the pipe continues past the CSO chamber, passes underneath the incoming sewer and shrinks probably into a pipe just big enough for continuation flow. It then enters a main sewer just downstream of a diversion to the CSO chamber. The whole setup acts as a storage tunnel with overflow that has been bolted onto an older sewer.

During a storm the storage pipe fills up, before backfilling under the CSO chamber and overflowing into Sidedraft.