I was walking down the Irwell one day and spotted some outfalls in the riverbank. A bit of research showed they were related to Wet Earth Colliery, a site that started the extraction of coal from the Irwell Valley Fault in 1740. James Brindley was responsible for the tunnels that I'd seen, the eminent canal engineer was contacted in 1750 to advise on how to drain the workings which had flooded soon after their construction.

Brindley orchestrated the construction of several tunnels and structures related to this task and several parts can still be seen today.

The power to drive the pump that dewatered the mine came from the River Irwell. A weir was constructed near Ringley to feed a 730m long, 7 ½ft tunnel on the opposite side of the river to the colliery. Building on that side meant it could be driven through the assumed soft sandstone on the north side of the Irwell Valley Fault. Once they started digging the ground actually turned to loser material and a great deal needed to be brick lined. 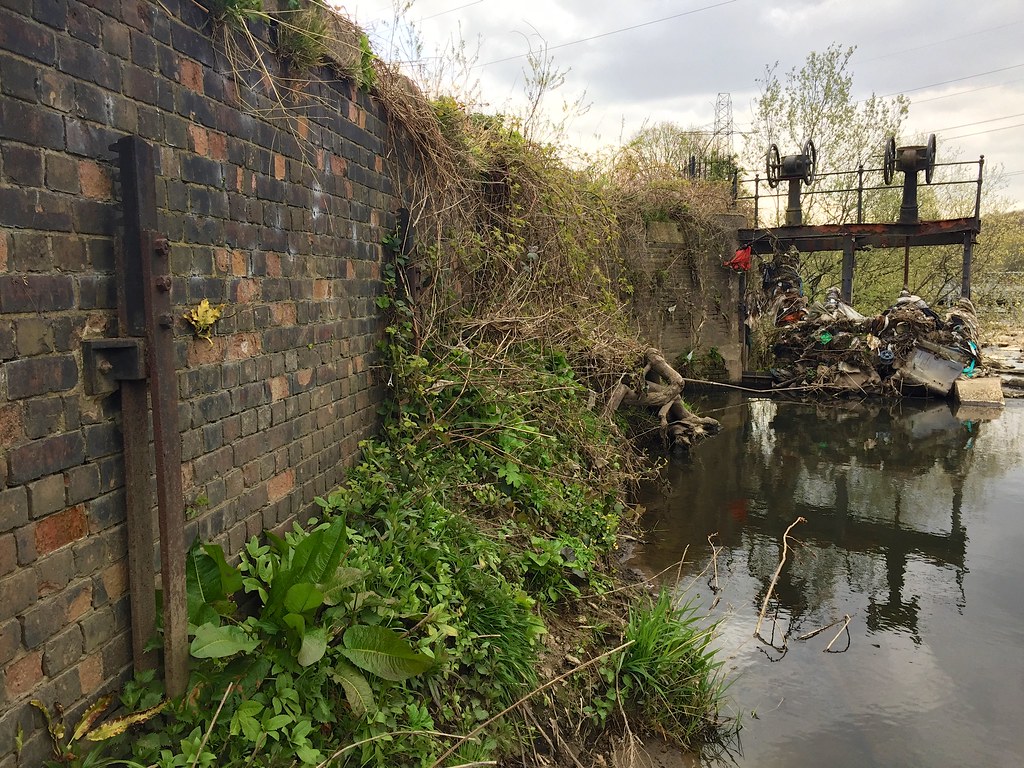 The inlet structure that can be seen today was rebuilt along with the weir in the 1920s. Inside is a brick arched chamber with 4 inlet ports that were covered by steel sluices. The remains of the racks and pinions can be seen today, a bank of mud has built up and the sluices are out of sight below the modern waterline anyway.

The tunnel ran along side the riverbank for 55m before a junction with a washout tunnel just downstream of the weir. There is no sign of the washout tunnel today, either it can only be seen at very low water or has been covered by rock. The tunnel was sealed in the 1960s when the site was bought for the sewerage works. One plug of concrete was poured in the washout junction and another before the tunnel entered the works boundary. Between these points the tunnel should be intact but the rest was collapsed leaving only a short section on the east side of the works.

A porous pipe was laid in the collapsed tunnel and forms the drainage for the works above. 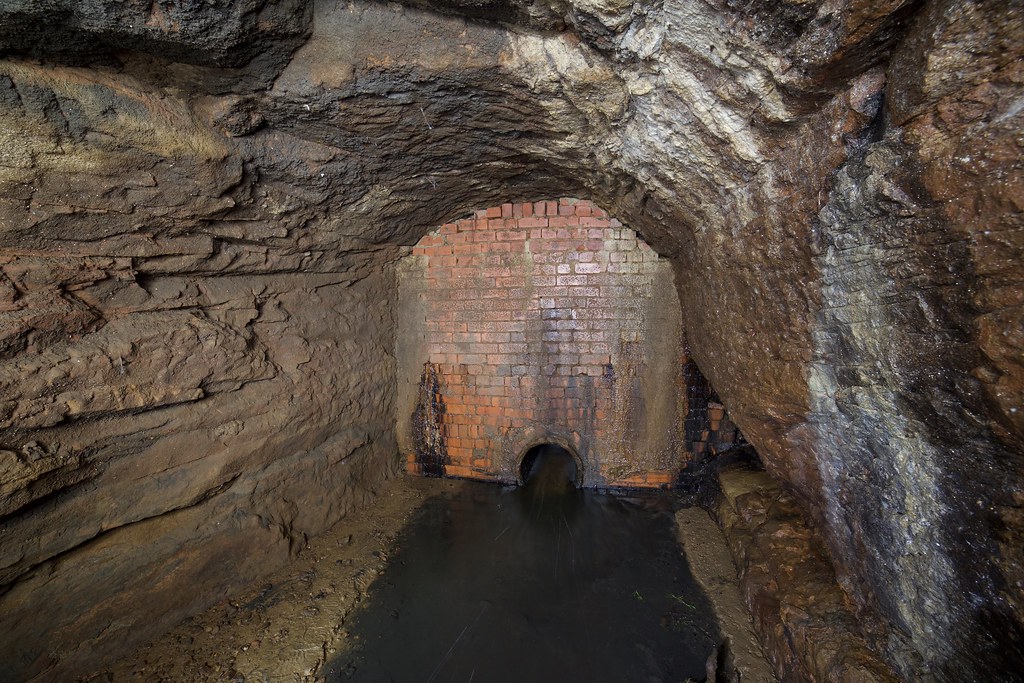 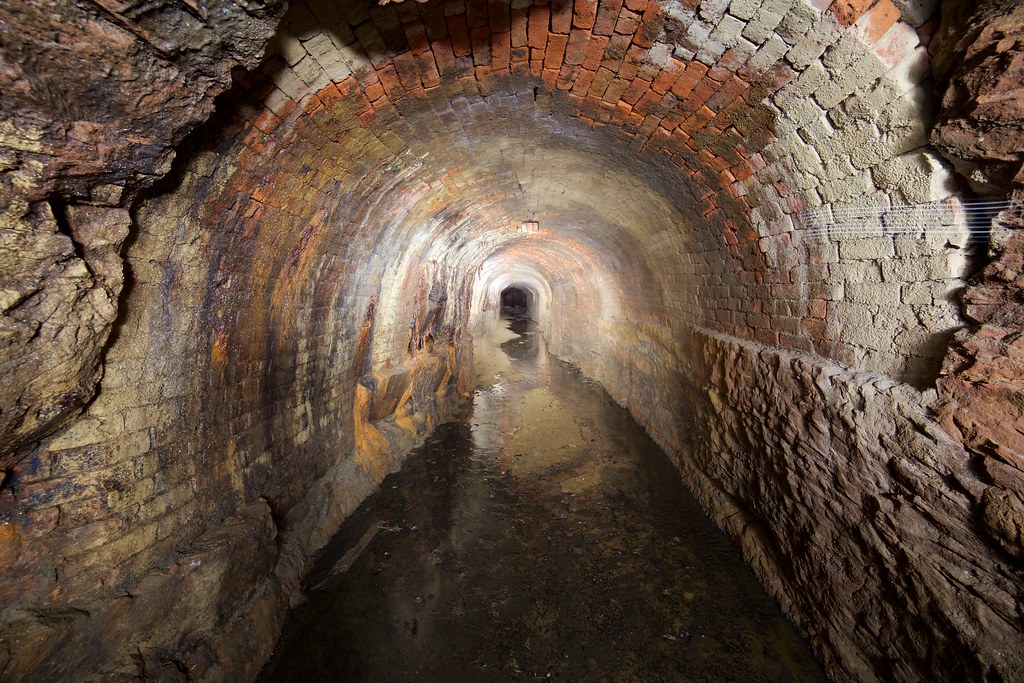 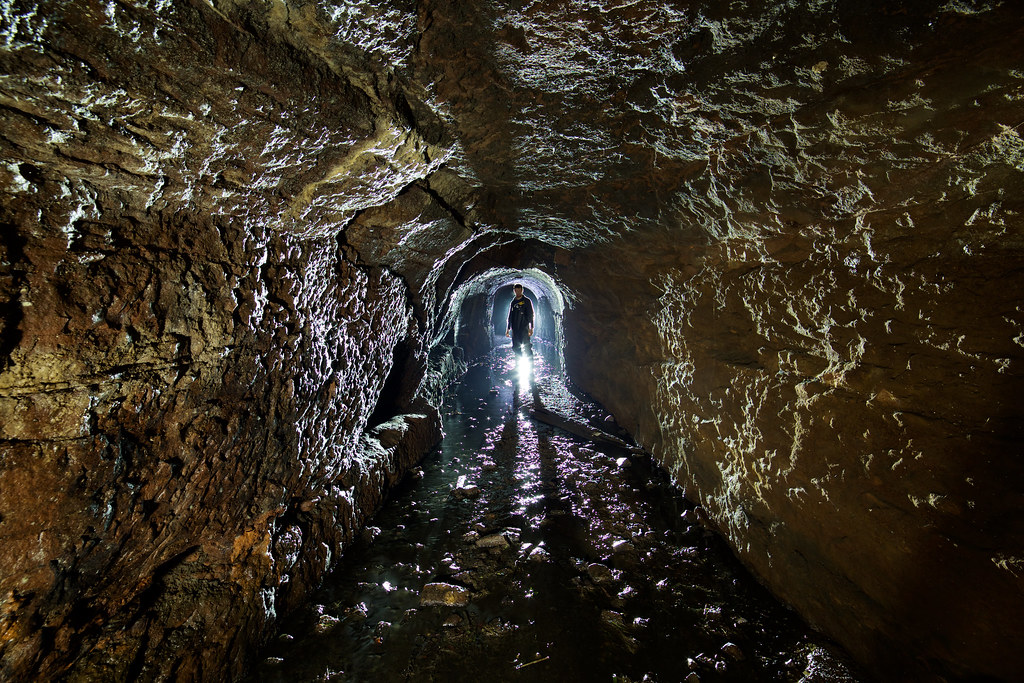 A downstream washout tunnel was also built and blocked by sluices, controlling the amount of water dropping down into a shaft (now walled off). 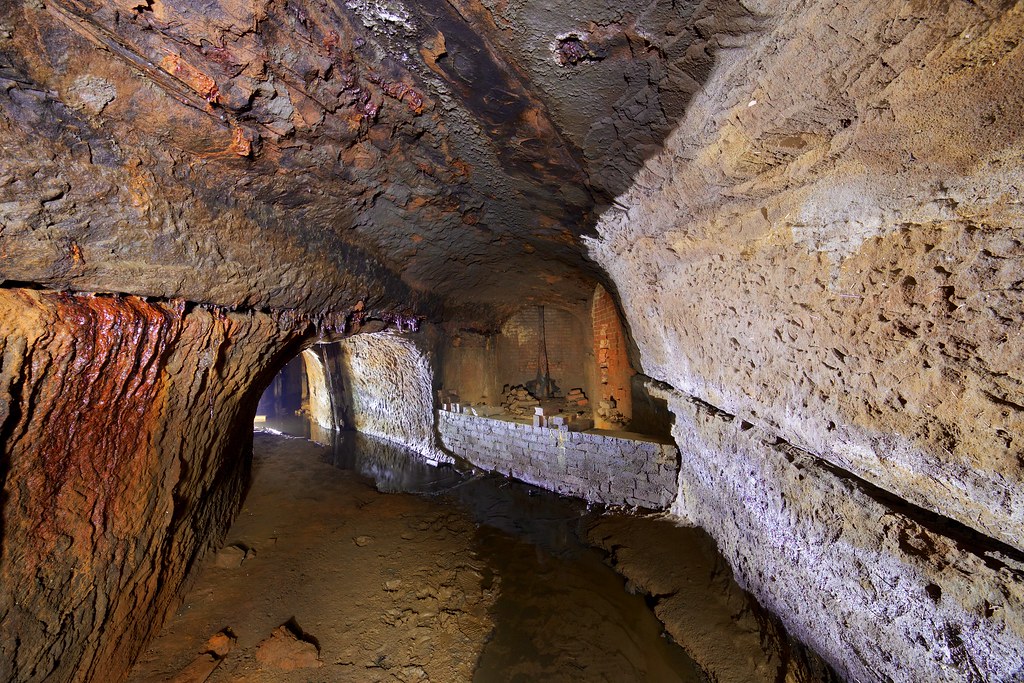 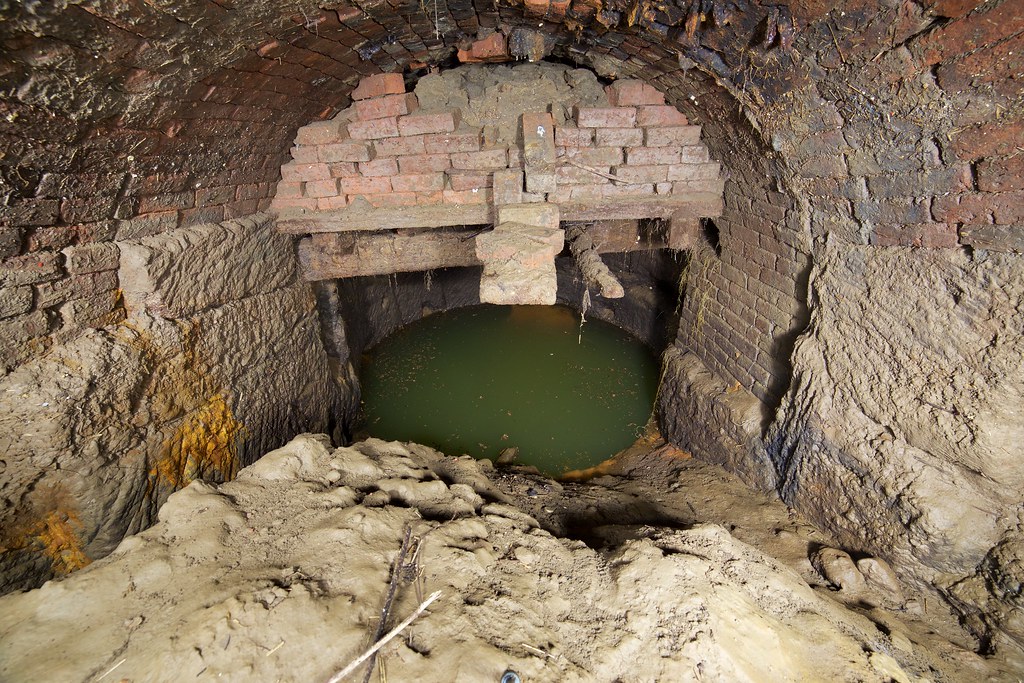 The siphon was one of Brindley's most innovative solutions; water flowed into the downcast shaft, along a tunnel under the riverbed, then into the upcast shaft in the opposite side of the river exiting at a higher level than it had entered at.

The upcast shaft can just be made out through a metal door, the water would have risen out into Fletcher's canal.

The colliery closed in 1928 and became derelict. It started to become unearthed again in 1990 when Alan Davies, Museum Officer at Salford Mining Museum, formed the Wet Earth Colliery Exploration Group.

The wheelpit is a 30ft+ deep brick lined chamber that sits next to the Gal pit shaft. It had filled in since the colliery closed, a combined effort from the exploration group and funding from Salford Council lead to it being excavated and a spiral staircase installed. The wooden waterwheel is long gone, a water turbine replaced it in later years but this now lies out of site underwater. 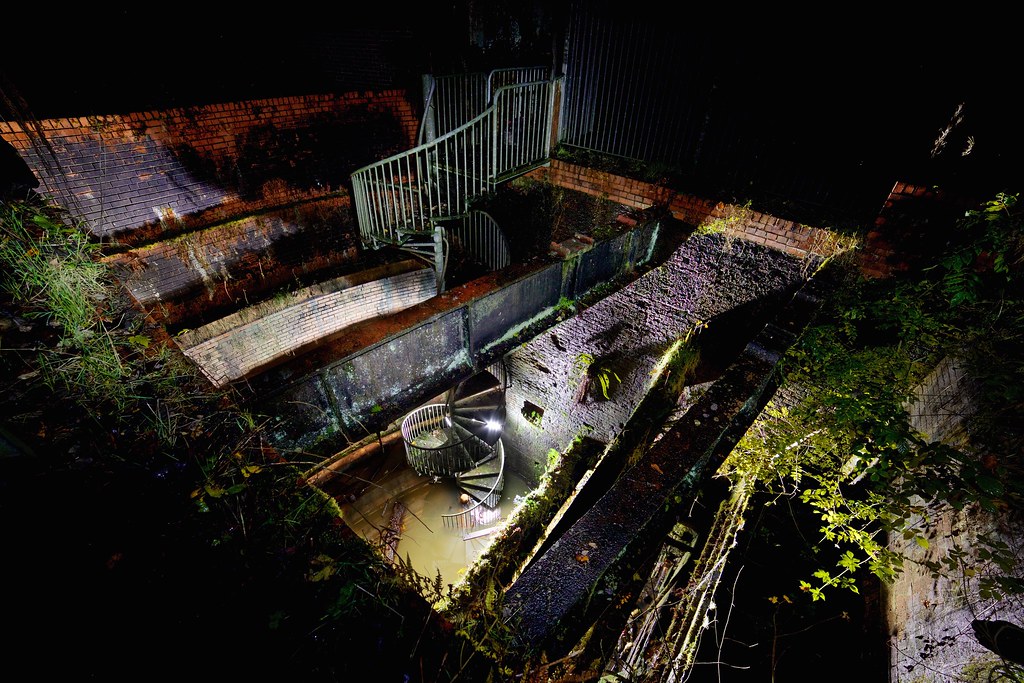 The water to power the wheelhouse came from Fletchers Canal and along the loading basin. A sluice and overflow slots along one side of the basin allowed control of the water level. After going through a portal known as the penstock arch was a short tunnel leading into the wheelpit. After turning the wheel the water left via a tailrace tunnel along with any pumped from the mine. 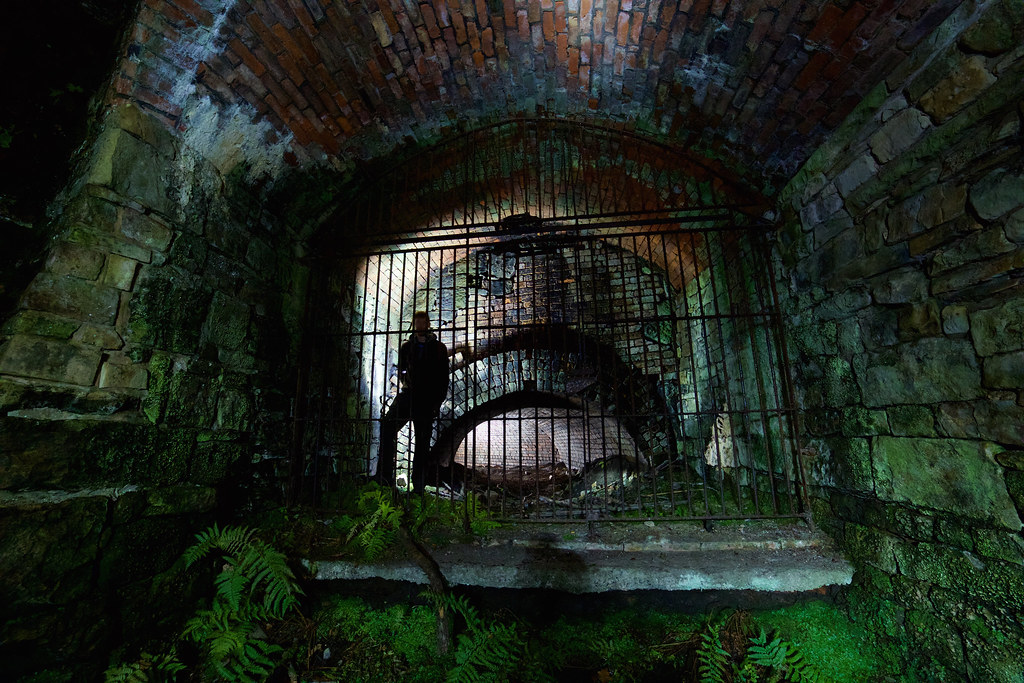 A system of tunnels that provided drainage to the Irwell connected the wheelpit, loading basin and Gal pit shaft. They received the most attention by the exploration group who had found silted up tunnels on the riverbank and spent months digging them out and exploring. An excellent pdf, "Diary of Exploration Volume 1" by Mark David Wright, details the exploration and is well worth a read. Link

The Manchester Evening News published a fear mongering article about safety in February 1997 and the Coal Authority sealed the tunnels up. I was curious if the tunnels were still inaccessible 17 years later so set down the riverbank to find them.

The main tunnel has a locked metal door, a small hole allows the inside to be seen, the tools used by the exploration group discarded inside.

Many other adits line the banks of the river around the area. All of which are grilled and most backed up with sediment.

It's a shame this site has been left to rot after the initial investment to start clearing it, several areas such as a turbine house on the riverbank have gone past the point of saving. What could have been an asset to tourism for Salford Council is instead left as a monument to bureaucratic shortsightedness.